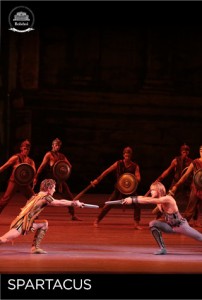 Bolshoi Ballet’s Spartacus is next up in the Cineplex Dance Series at the Langley Cineplex this Sunday, March 6, at 12:55pm.

“Grigorovich’s Spartacus was created at the Bolshoi in 1968 and has since remained the Russian company’s signature ballet. This most spectacular production is an epic tour de force, giving full expression to the virility and strength for which the Bolshoi’s male dancers are renowned.”